Back in the 1970’s America sang, “We used to laugh, we used to cry,we used to bow our heads then, wonder why. And now you’re gone, I guess I’ll carry on, and make the best of what you’ve left to me…”

I know how they felt, but it’s me that’s left me, which is a  difficult thing to achieve.

For a variety of reasons I fell off the self-care/fitness wagon and allowed myself to become one with Space Balls‘ character Pizza The Hut. I was a mess. Right now I’m a recovering mess.

To better myself I have set out on a trek (well, mostly a Cannondale, but I digress) to regain my lost health. Part of health is fitness and my best test of aerobic fitness is cycling, an activity I have performed for well over 10,000 hours in the last thirty-seven plus years.

My response was that I should be able to go out and cycle 18 miles in an hour without discernible effort; that to me, for me, 18 is a “C” grade. Today I got my “C” grade- almost!

I managed to ride 14.24 miles in forty-seven minutes, twenty-four seconds, an average pace of three minutes, nineteen seconds/mile which absolutely makes my pace faster than 18 mph. Of course, the question is, could I have maintained that pace for another 3.76 miles?

I don’t know, and today, for right now, I don’t care. (Much) Because I am making much needed progress.

BTW- here is a chart of how many watts is required for me to cycle at different mph, and yes there was a time when I could (occasionally) muster 25mph for 15 miles or less.

Cycling for an hour I would burn the following:

BTW- This chart shows why riding faster is so much harder than riding slower. The uptick in speed from 20mph to 25 mph is only 25% but the uptick in effort is 145%.

I hope my voyage to recovery continues because it’s a whole lot harder being old and out of shape than it is just being old! 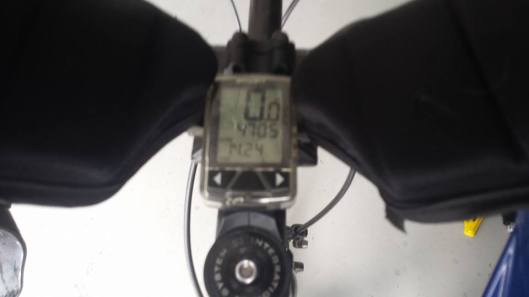 run huff-puff
ride glide-fly
why suffer so
for sake of pride?

each of us must move
to maintain physical integrity
too much pain now in running
self why do that to me?

run huff-puff
ride glide-fly
why suffer so
for sake of pride?